Stretching from 22ºN all the way down to 67ºS, Omfall is a massive continent encompassing a large variety of terrain types.  Omfall pushes right up against Eerien to the north, with but a narrow channel running between them.  This channel is known as the Aesean Duct.  The tropical Mareas Island is in the northeast of this map, between separating Omfall from the Great Caldera.  Below that is the Taslan Peninsula.  From both Mareas and Taslan run strings of islands which connect up with the Arm of Ule, separating the Calderan Sea from the great Penggelan Ocean along Omfall's eastern coast. 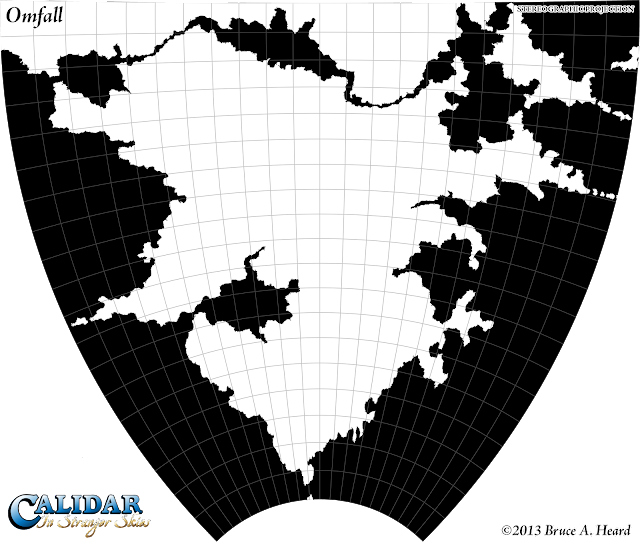 In the far south, the Cape of the Last Howls points south towards Mormoroth, touching the Antarctic Circle.

I am currently working to finalise Omfall's height map for the erosion process.  In Omfall's case, because it's so huge, erosion will likely take about a week.  It's important to get the terrain right before starting erosion, because fixing problems is much harder after erosion.  If we need to revise the map, it generally means going back to the pre-erosion map, then running it through erosion once again, which takes up a lot of time.

Take a look at how the design evolves.  The first draft quite faithfully follows the mountain design.

The mountain ranges are too regular, don't you think?  They needed messing up a bit.  This was done in the second draft.

You can also see some notes from Bruce marked up in the second draft.  These were areas to lower.  The third draft incorporates these changes.

The fourth draft, which I am working on now, includes the all-important altitude scaling of the mountains which I mentioned previously for Eerien.  Without this scaling, all of the mountains throughout the continent will end up being roughly the same height.

There are two more islands to look at to round out the western hemisphere.  Come back again tomorrow for a look at the first of these.
Posted by Thorf at 3:26 am
Email ThisBlogThis!Share to TwitterShare to FacebookShare to Pinterest
Labels: black and white, Calidar, height maps, Omfall, Stereographic
Location: Akita, Akita Prefecture, Japan