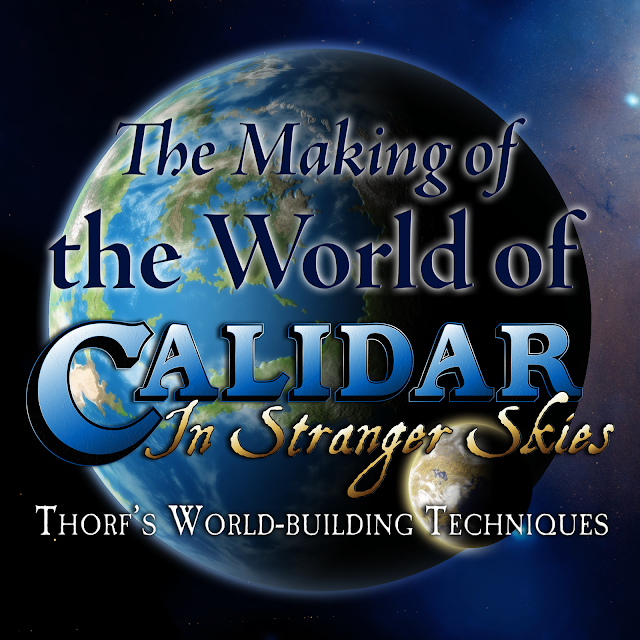 The Making of the World of Calidar
by Thorfinn Tait

For the past six months or so, I have been working on +Bruce Heard’s new project, the +World of Calidar.  Bruce brought me on board early on, first in an advisory role, then as Calidar’s official cartographer.  Working with Bruce is tremendous fun – in fact it’s nothing less than a dream come true, really.

You see, I grew up on the Known World and Mystara, and I was an avid reader of Bruce’s Voyages of the Princess Ark articles in Dragon magazine – not just the stories, but the specific combination of fiction with gazetteer info, and the all-important hex map that accompanied it.  Inspired by Mystara’s maps, I went on to create my own system for hex mapping, using Adobe Illustrator, and I have since recreated and updated almost all of Mystara’s published maps.  It’s through my Mystara Atlas project that I learned most of my cartographic skills and knowledge.


The Mystara community is friendly, civil, and just generally pretty wonderful, but the setting has been out of print for almost twenty years now.  For years, I have longed to work on a living and breathing setting.  With Bruce’s return to the industry last year, for a while it seemed like this may indeed come to pass, as he produced new articles and maps detailing Mystara’s continent of Alphatia.  However, the current rights-holders turned down Bruce’s licensing proposals, and the possibility faded.

However, in its place, like a phoenix rising from the ashes, the World of Calidar project was born.  For a Mystara fan, Bruce’s announcement was a bittersweet moment, but since then there has been no looking back.  I think it’s no secret that I am a huge fan of Calidar already.


So, getting back to the topic at hand, Bruce started sharing drafts of Calidar’s world map with me back in May.  Then in July, he tasked me with making maps of Calidar.  Since then, I have been working on all aspects of Calidar’s geography, in close collaboration with Bruce.


Mapping out the new World of Calidar has meant building a fantasy world from the ground up – or perhaps rather from space down.  Starting with the world map, then zooming in on one major continent, and finally zooming in one step further to deal with individual countries in that region, this project demands a number of different styles at various scales.  I’m most well-known for my hex maps, and while Calidar will of course have its own hex maps, these will be just one of a number of mapping styles – I have been expanding my cartographer’s toolkit greatly for this project.


I will be documenting all of these techniques in this series of “making of” tutorial articles.  I hope that the “making of” parts will be of interest to Calidar fans in general, while the tutorial parts should be of use to my fellow fantasy cartographers, from whom I have learned a great deal during my work on this project.

The order may change, depending on which sections become ready for posting first.