Map of the Day 14: Mormoroth

Welcome to the third week of daily Calidar maps.  This week we continue our world tour, with a new continent each day – beginning with the south polar continent of Mormoroth.

As I have mentioned in previous posts, the polar areas can be the most problematic for any world builder.  This is because it is easy to draw onto a rectangular world map – which of course warps the poles more and more until the top and bottom lines of the map represent the points of the poles.

Calidar was no different, and the polar regions caused so much trouble that at one point we considered simply having no land in these regions of the map at all.  However, in the end we used map projections to solve the problem.  The result is the design you see on the left.

What I did was to redraw the coastline on the Polar Stereographic map, resulting in the second draft image on the right.  Then I reprojected the new design back to Equirectangular, and slotted it in to the world map – as you will see perhaps next week.

With the projection issues sorted, I'm sure you all know by now what came next: mountain designs, followed by erosion.  After Bruce gave me the okay on the new coastlines, I had to adapt the mountain design to it, then work on the height map.

The funny thing about Mormoroth is that since it lies at the south pole, most of the height map design will not be visible on any map – it will all be buried in a massive ice sheet, with only the highest mountains sticking out the top.

Undaunted by this, I went ahead and developed the area anyway.  I have yet to work out how to implement the ice sheet itself...  In the meantime, here are some views of the eroded height map – a peek beneath the ice sheet, if you like. 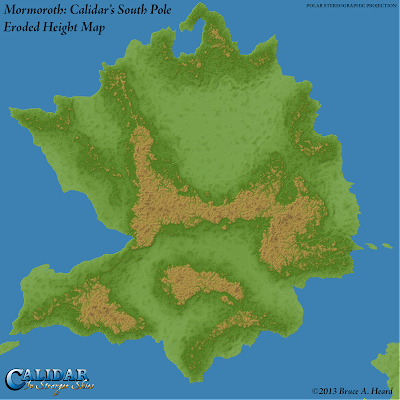 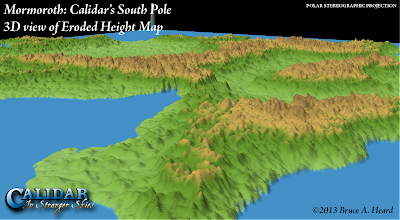