Today we take a slight detour from our Calidar world tour to present something special: the first work-in-progress hex map for Calidar.

This is Bruce's original first draft of Palatine Island, the main island of the Kingdom of Meryath.  It was revealed today on the Kickstarter draft page.  (The project is not live yet, but you can now see the page and check it out.) 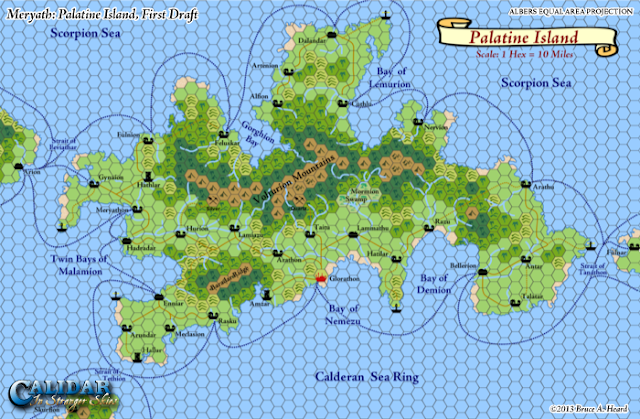 In terms of art, it's bare bones stuff - it's pretty much just the default hexes that come with Hexographer.  I am hard at work on a new set of hexes for Calidar, which will eventually replace these.

But in terms of development, everything you have come to expect from Bruce's hex maps is right there.

By the way, the projection this map is based on is called Albers Equal Area.  I chose this projection because it accurately depicts the area of the region.  This will make Bruce's demographic calculations all the more accurate, since they are based on hexes.

Another policy note about hex maps: you won't be able to join up all Calidar's hex maps into one massive trail map, I'm afraid.  The reason for this is simple: hex maps were never intended to cover large areas.  By definition they imply constant shape, direction, area and distance – which is an impossibility for any map of a sphere or ellipsoid.  At larger scales (i.e. showing things up close or zoomed in) the distortion is manageable, if not insignificant.  But at smaller scales (zoomed out), the distortion becomes so extreme as to make the hexes meaningless.

But don't despair!  That's where other cool map styles come in.  If you're a fan of hex maps, you can rest assured that Calidar will have many wonderful hex maps – Bruce is after all pretty much the king of hexes.  The only thing that will change is that there will be more other styles of maps in addition to the hex maps.  It's the best of both worlds, really. 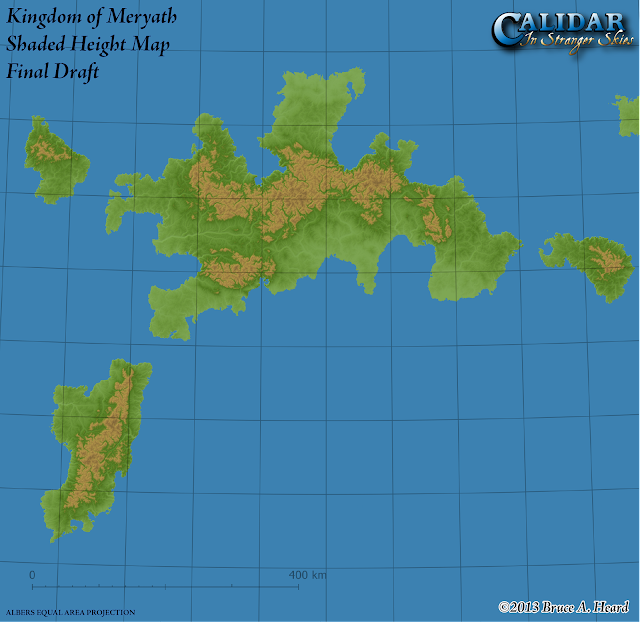 An expanded version of this hex map, including the other islands of Meryath as well as some other things, is one of the stretch goals in the Kickstarter.  If we get that far, you and I will all be able to hold this map in our hands.  Let's make it a reality!

While we're on the subject of hex maps, if there's anything in particular that you would like to see in Calidar's hex maps – a new kind of hex, a certain way to use a symbol, or anything like that – please let me know.  Now is the time to make such changes, while I'm working on setting the style.